Music, as a usually central and constantly active element of a soundscape, is a good candidate for using callbacks. In this lesson, callbacks have been integrated into the music to make graphical elements respond to the music themes. When receiving a notification from a musical feature, you can call elements in the game and make them seem like they are reacting to the music, like having the trees dance to the music rhythm.

The region music in the Wwise Adventure game consist of six different themes, each sharing the same tempo and key.

With the AkEvent or AkAmbient component it's a fairly easy process to set up callbacks. Both of these components will offer a Use Callbacks property, which is used to define the necessary information to create a callback. 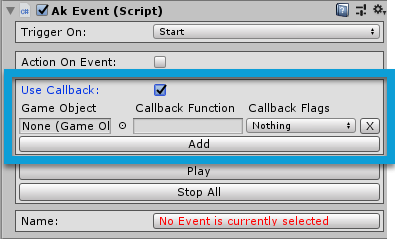 To make a callback you need to define two types of information. First you will have to assign a Callback Function, and on what Game Object you will be able to find this function. Secondly, you need to specify when the Callback Function should be called, by selecting one or more Callback Flags (also referred to as Callback Type in scripts). These two pieces of information will be sent along with calling the event, and once the Callback Type is met, the function specified in the Callback Function property will be called. In the following steps, you will be modifying the scale of a tree based on the tempo of the music in the Wwise Adventure Game. First, you will post the Music_Region Event from an AkEvent component and secondly add the RhythmActions script to a tree. 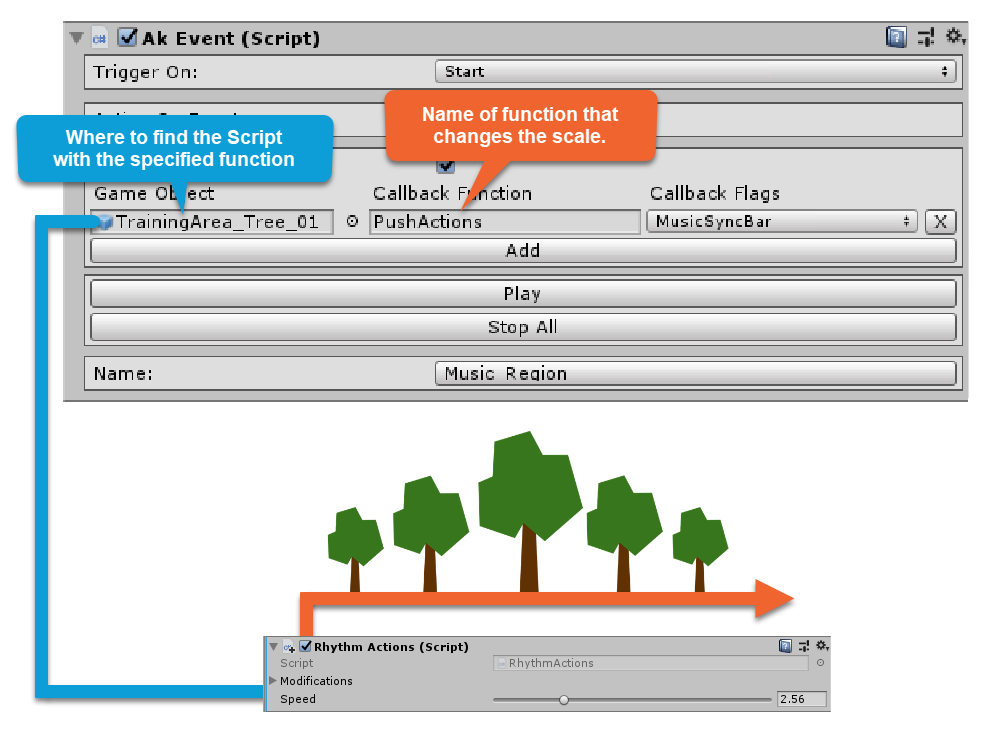 Lastly, you will call the RhythmActions script from the Music_Region AkEvent by callback.

The AkEvent or AkAmbient components are the quickest way to set up callbacks with up to a few game objects. However, the method is not ideal when applied to many game objects because you'd have to add them one by one. Instead, you can get great benefits from enabling callbacks from a script, which you will learn more about in the next section.