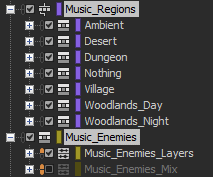 Based on the Player's location in game, the Music_Region Switch Container will transition into the referenced region theme. Each of the region themes have then been organized into a Music Playlist Container, that will repeat the theme until another is entered.

As such, the music themes will stay synchronized no matter what game object they are being posted onto. Even if the region theme were to be paused and resumed later, the enemy theme would simply be reactivated by the region theme.