Several examples are helpful to have a clear picture of how dialogue should be handled positionally in games. Linear media, such as film and television, can help guide the way we present dialogue for the screen, but doesn't accommodate the entire scope of concerns when it comes to handling interactions that are presented dynamically.

With cinematic conversations usually anchored in the front speakers during sections of the game where control is taken from the player, setting the position of dialogue during these sequences to 2D will appropriately manage their placement. By default, 2D objects are only played through the front left/right speakers for sound objects without any propagation behaviors. Adding a percentage of the center channel allows for an additional level of control. 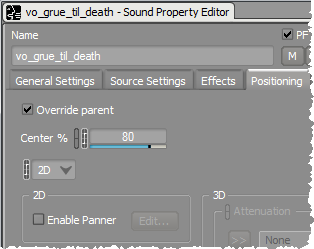 In situations where the player is present during the delivery of gameplay dialogue and able to move throughout the world, it may be necessary to play the dialogue positionally in 3D. Simply subscribing an attenuation to a Sound Voice with the game object at the location of the character speaking the line will apply the specified volume reduction based on the defined attenuation. This case allows for situations where you are free to move about while dialogue is spoken by characters positioned in the game world.

Adding realism to positioned in-game dialogue doesn't have to end with volume attenuation. As described in the campfire example in the Ambient chapter, most voices could benefit from the addition of a spread across adjacent speakers at close distance. Taking the implementation a step further, the addition of cone attenuation could be used to focus the direction of the sound controlled by the orientation of the game object, or in this case the mouth of the character speaking. Applying a cone attenuation allows for the attenuation and filtering of the sound as the listener moves outside of, or behind, the oriented game object. This simulates the obstruction of the character's head on the spoken line of dialogue.

Introducing additional techniques for simulating realism with dialogue are worth investigating, but knowing whether the dialogue being delivered is critical to the game play can quickly determine how much realism can be used. If, for instance, it's important that the player hear the secret to subduing the dragon, then realism should not get in the way of delivering the dialogue by obstructing it with filters or volume attenuation. Ideally every conversation in the game needs to be built along the fine line between realism and storytelling to deliver, coupled with game play, an immersive conversational experience to the player.