There are a number of important new features in Wwise 2017.2 and its Unity Integration. These include the following:

The Wwise sound engine is now initialized while Unity is in Edit mode. This means Wwise Events can be triggered from the editor without entering Play mode. In order to demonstrate this, the inspectors for AkEvent (and AkAmbient) have been updated. There are now buttons in the inspector that can be used to play and stop the Events directly from the editor. The Play/Stop button plays and stops individual Events. When multiple objects that have AkEvents are selected, the Play Multiple and Stop Multiple buttons play or stop all currently selected Events. The Stop All button stops all currently playing Events. 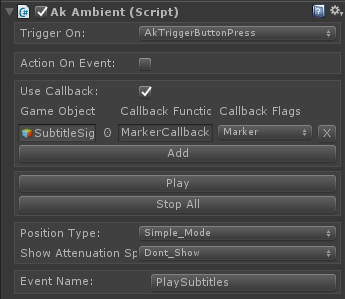 MIDI events can now be posted to Wwise via C# scripting. See Sending MIDI to Wwise. for more information.