Each sound object has additional HDR functionality within the Actor-Mixer Hierarchy. From the HDR tab in the Property Editor, special considerations can be addressed that affect the way sounds behave when processed within the HDR system.

In the Wwise Project Adventure Actor-Mixer Hierarchy, begin by setting volume values for groups of sounds based on the provided Work Units: 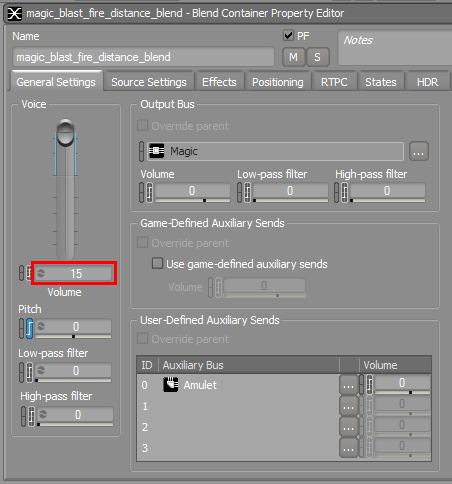 Setting the Volume for the “magic_blast_fire_distance_blend” Blend Container

These values represent a relativistic mix that represents magic sounds as the loudest, followed by: combat, character, and ambient sounds in decreasing amplitude. This simple group-based mix allows you to audition different sound types within the HDR system to see how playback affects each of them.