High atop the misty mountain peak, the wizened Wwizard stares out across the battle raging across the valley. The maelstrom churns below as the loudest sounds of cold steel-on-steel impact, blasts of magical power, and the release of catapults drift up from the ensuing assault. As each one of these moments takes precedence, the soundscape clears to reveal and accentuate the madness unfolding. Whether we are conscious of it or not, a finely tuned mechanism is at work assigning relevance to the loudness of what we hear and shaping the way we inherently experience the world through sound. So how can the idea of prioritizing loud sounds fit with today's gaming?

High Dynamic Range (HDR) is a new mixing paradigm available within Wwise to augment the already existing suite of dynamic mixing tools. HDR allows for authoring a system that responds to the dynamic loudness of sounds by giving priority to sounds that are authored the loudest. With this relativistic mixing system, the clarity of intention from the authoring perspective is ensured to make appropriate space in the mix for “important” sounds to be heard.

Think back to the scene that we just described. As the sounds of battle ensue, you instinctively focus on the loudest sounds (combat) and quieter sounds (footsteps) are ignored. In an HDR system, these loud sounds represent the top of a user-defined “window” that moves dynamically to ensure that the loudest sounds are in focus. As this window moves upward, sounds below the window bottom are removed from the mix. When one side emerges triumphant in the battle below and eyes turn toward the misty mountain top, the sound of horse hooves pounding the earth swell with renewed amplitude, becoming the loudest, and most threatening focus. As the HDR window threshold returns to its rest position, the original amplitude of the horses is represented. 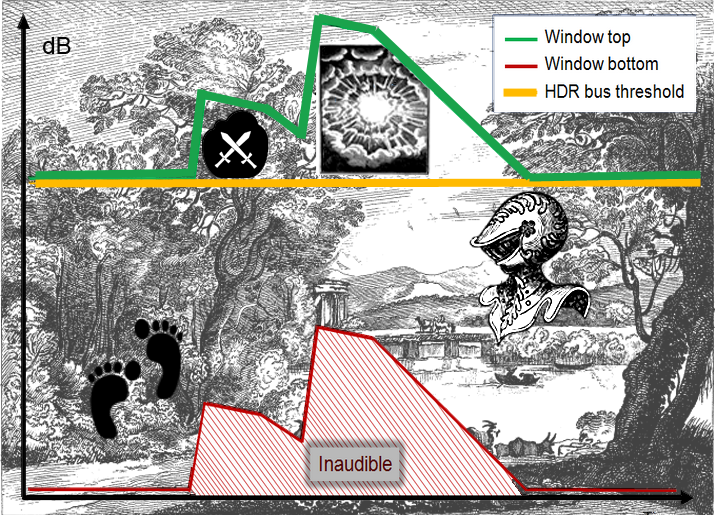 An illustration of the HDR window shifting in response to increasing loudness of sounds over time.

This chapter will take you through the process of: