It begins with an earth shaking rumble as the dragon emerges from an underground lair, followed quickly by the pounding of gargantuan footsteps racing towards the final showdown. With the expectation of a soundtrack to match the intensity of this scenario, it seems a perfect fit for using sound to drive controller vibration.

Wwise offers a complete pipeline for creating and integrating motion in your game. By implementing a comprehensive pipeline solution for motion, similar to the one that exists for building audio, Wwise allows you to:

Before creating motion effects in the project, the types of motion devices need to be enabled within the Project Settings in order to create motion effects. 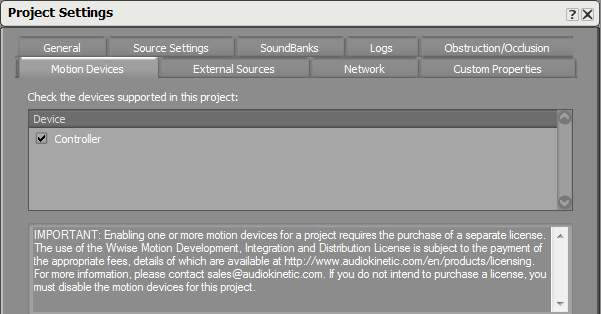 After a motion device is enabled, you can do the following in the project:

At a very basic level, motion data is generated in Wwise from a source. This source can either be an existing media file, a new media file, or a Motion generator plug-in. After you have decided which motion devices will be supported by the game, you must then decide which method you will use to generate motion.

In Wwise, there are two different methods for creating a motion source: