Whether you find yourself at the edge of a cliff overlooking the path ahead, or standing at the mouth of a dungeon thinking about what might be lurking in the shadows, the sound of wind can help add an epic tone to the situation. The SoundSeed Wind plug-in has been created as a runtime-efficient solution to the challenge of authoring dynamic wind elements.

The SoundSeed Wind plug-in is a Wwise source plug-in that generates wind sounds as they pass through and around objects. These sounds are generated by using time-varying parameter sets to drive a synthesis algorithm. No source audio files are necessary as the wind sounds are completely synthesized. SoundSeed Wind allows you to save memory in-game because there is no longer a need for the long looping wind ambience .wav files that would have traditionally been used.

SoundSeed Wind emulates the flow of wind through a scene; the direction specifies the point of entry of wind flow on to a scene. Thus you should expect pressure waves to hit the deflectors closest to the entry point first. The flow will then propagate through the scene as it is pushed by incoming wind. As it propagates, you will hear deflector objects that are placed farther from the entry point as they encounter the oncoming pressure wave. Note that higher wind speeds at the entry point push the flow at a quicker rate than slower speeds.

The following illustration demonstrates a typical scene where wind and a series of deflectors are defined using a set of properties. Deflectors will appear smaller or larger in size and lighter or darker in color, depending on the frequency and gain property values assigned to them. 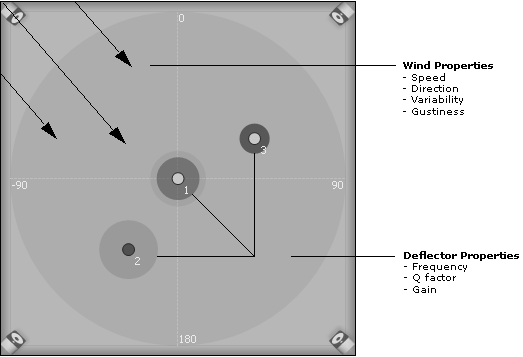 The biggest benefits to synthesized wind are the ability to dynamically manipulate the wind model in real time, the randomness of generating sound differently every time, and the memory savings incurred by removing audio content from the equation. What would normally have taken a many seconds long audio file can now be replaced by realistic models authored within Wwise. These authored sounds are further modifiable by game parameters at runtime, as well as from within the authoring application while connected to the game.

Adding the SoundSeed Wind plug-in to a new Sound SFX is accomplished in the same manner as the silence plug-in covered in the ambient chapter.