To maintain an optimal level of performance when many sounds are playing simultaneously, sounds below a certain volume level should not take up valuable processing power and memory. Instead of playing these inaudible sounds, the sound engine can queue them in the virtual voice list. Wwise continues to manage and monitor these sounds, but once inside the virtual voice list, they are no longer processed by the sound engine and won't take up one of the hardware's active voices.

Managing virtual voice behavior can be done in the advanced setting of any sound object, Actor-Mixer, or audio bus in the Advanced Settings tab of the Property Editor. 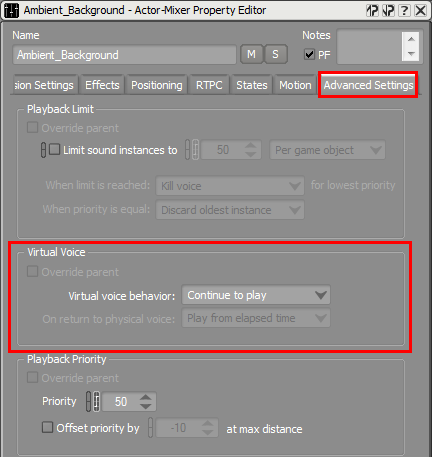 There are three options to choose from when determining the move from physical to virtual voice:

When a sound or motion object is sent to the virtual voice list, certain parameters of the object are monitored by the sound engine, but no processing for audio or motion occurs.

When Send to Virtual Voice is set, there are three options that determine the behavior of sounds or motion objects that move from the virtual voice list back to the physical voice.

This option is not sample accurate, so sounds returning to the physical voice may be out of sync with other sounds playing.

Each behavior has its own performance characteristics, as demonstrated in the following table: 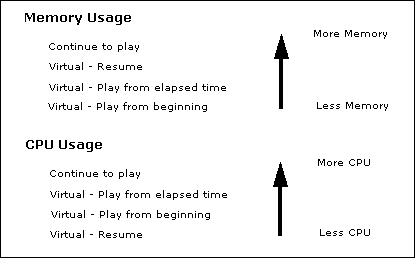 In short, taking control of instances and priorities can actually change the sound of your game. Special care and handling should be used when defining the properties at every level of both the Actor and Master-Mixer Hierarchies. Restrictively modifying these setting can prevent important sounds from being heard appropriately, in the same way that ignoring the setting can result in unwelcome behavior.

For additional information on Instance Limiting, Prioritization, and Virtual Voices: