The Sequence Editor within Unreal Engine 4 is a cinematic editing tool similar to Matinee. It allows users to add Tracks that can modify certain properties of Actors in a level.

For instructions on how to:

Both of these Tracks can be added as Master Tracks or associated to an Actor. When associated with an Actor, they perform their Wwise related functions on the UAkComponent attached to this Actor. When created as a Master Track, the AkAudioRTPC Track sets global RTPC values, and the AkAudioEvent Track posts Events on a "dummy" game object.

For AkAudioRTPC Tracks, Game Parameter curves can be modified using the built-in curve editor. Key frames can be added by placing the cursor at the appropriate location and pressing the Add New Key button (found on the right side of the listed Track). 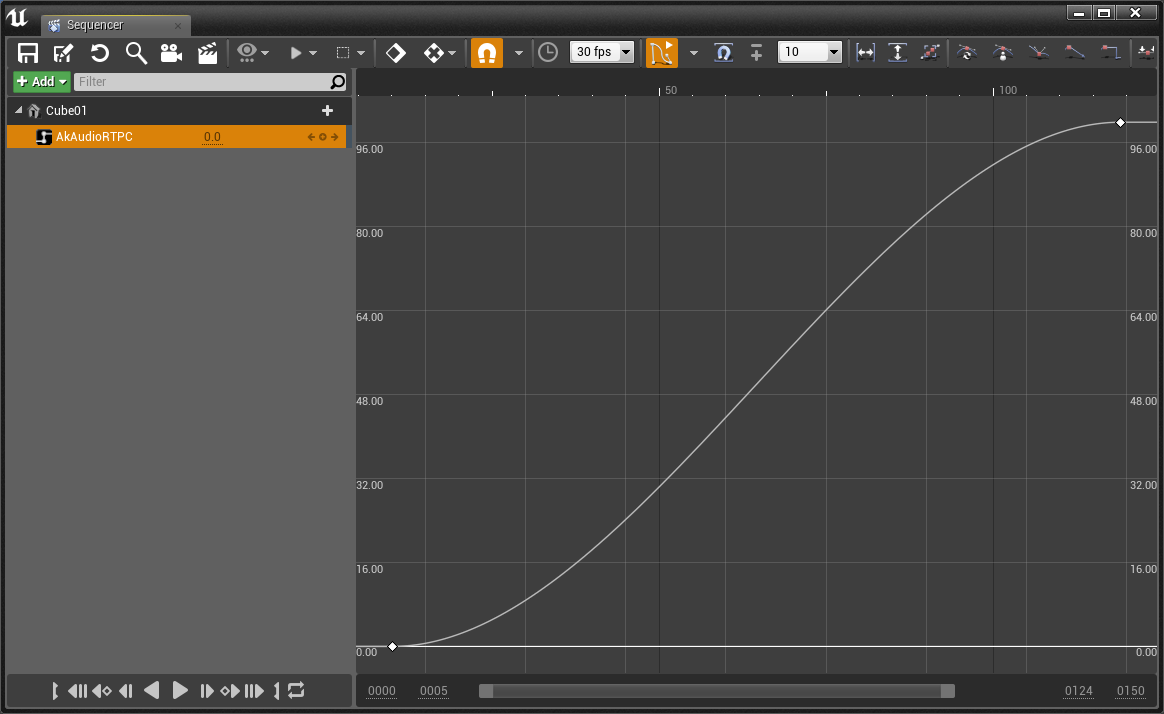 An AkAudioRTPC track in the Curve Editor view 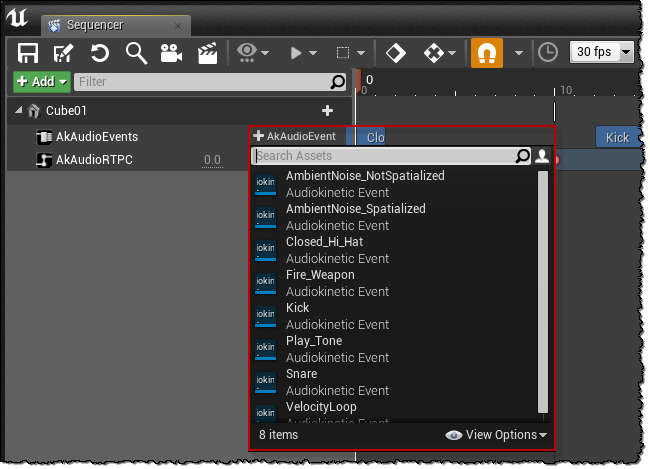 If an AkAudioEvent section is added that has its Event property set to "Play_Sound", then the longest of the three Audio Sources will be displayed within the section. Note that the waveform displayed in the section may be followed by empty space if the Wwise Event lasts longer than the longest Audio Source that it contains. In this example, since the "Play_Sound" Event has two play actions (for "Layer_2" and "Layer_3") that are delayed, it will last longer than the "Layer_1" audio source that it contains. The empty space after the waveform indicates the maximum estimated duration of the Wwise event, as calculated during soundbank generation (see Wwise Project Setup).

"Out of Sync" Waveforms

If changes have been made to an Event's workunit in the Wwise project that are not reflected in the generated soundbanks, any AkAudioEvent sections for that event will be marked as "out of sync". The waveform will be displayed in red, and an asterisk will be appended to the name of the AkAudioEvent section. There will also be a warning printed to the output log when Events are triggered from "out of sync" sections.

Example 'Out of Sync' AkAudioEvent Section

From the AkAudioEvent track, a context menu can be opened (right-click) which includes the following Audiokinetic-specific options:

From the AkAudioEvent section on the track, a context menu can be opened (right-click) which includes the following Audiokinetic-specific options:

The properties list in the context menu includes the following Wwise-specific properties for the section:

Generally it is recommended to use very simple AkAudioEvent sections in the Level Sequencer, such as a simple Play action on a Sound SFX. More complex Wwise Events, such as those containing delayed actions, Seek actions, or which reference Random Containers, Sequence Containers and other non-deterministic objects should be avoided or broken down into simpler events for optimal use in the Level Sequencer.

Scrubbing and playing from cursor will not work as expected on Events with delayed actions or which contain infinitely looping sounds.

To ensure that Event lengths are properly represented in the AkAudioEvent Tracks, the Wwise project needs to be set up to estimate the duration of its audio Events and JSON metadata must be generated. To enable these project-wide settings, go to the Project Settings' SoundBanks tab. Enable the Estimated duration check box within the Metadata Options group box and enable the Generate JSON Metadata check box within the SoundBank Settings group box, as seen below. 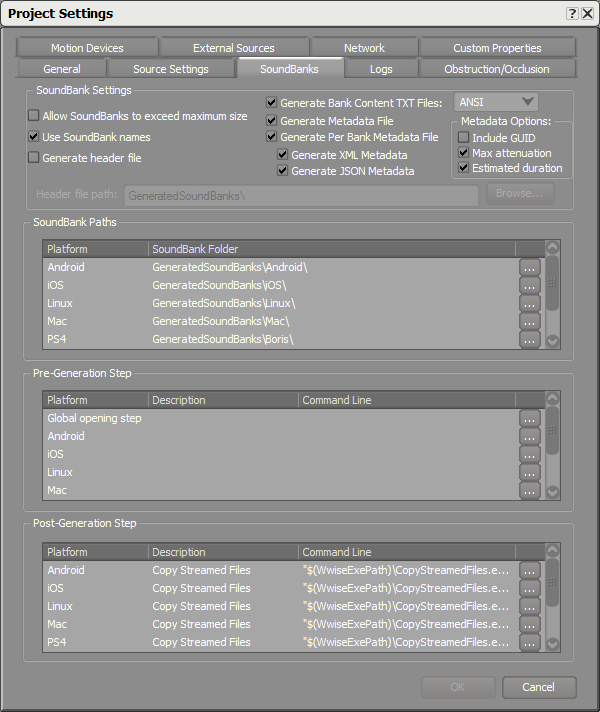