There is often a point during development when the reorganization of a Wwise project can help prepare for the next phase of development. Whether it's due to project iteration or a changing asset naming standard, a clean and clear project organization can quickly communicate an abundance of information. No place is this made more transparent than in the naming standard that is adopted throughout. From WAV file to container, Event to SoundBank, and places in-between, how things are named can help swiftly navigate the idiosyncrasies of a project. One of the tools that can help unify a project's naming is the Batch Rename utility.

From a simple "find & replace" to a more complicated naming that involves invoking regular expressions, batch renaming can be done across any nameable assets in the Wwise project. Any combination of Sound Objects can be selectively renamed and modified in order to adhere to a standard.

To change the name of all Character footstep sound objects, multiple select the sound objects in the Project Explorer. 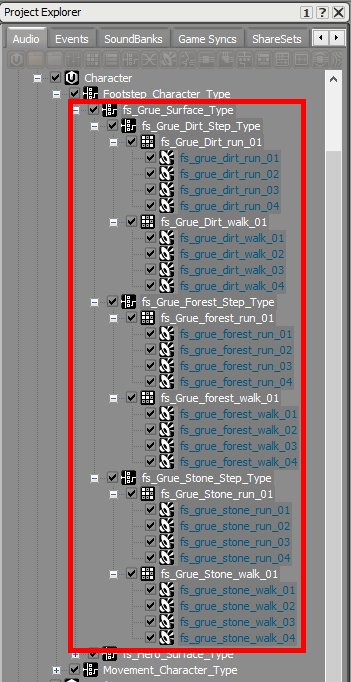 Selection of objects in the Project Explorer for the Batch Rename

Once Sound Objects have been selected, the Batch Rename view can be accessed by right-clicking and selecting "Batch Rename..." from the list of options. 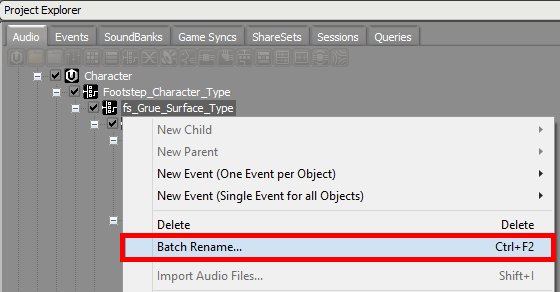 Alternatively, any combination of Sound Objects can be dragged and dropped from the Project Explorer to the Batch Rename Preview panel.

Dragging objects from the Project Explorer to the Batch Rename view

Once Sound Objects have been added to the Preview panel, individual selections can be removed by right-clicking and selecting "Remove from List" from the contextual menu, or by pressing the "Delete" key.

In this example the name of the creature will be changed from "grue" to "monster" across all of the Character movement Sound Objects. This can be accomplished by enabling Replace, entering "grue" in the "Find What..." field and "monster" in the "Replace With..." field. 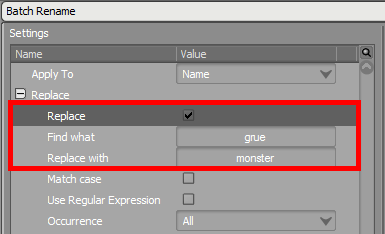 Using the Replace section of the Batch Rename

Additional Rename functionality includes the ability to Match Case, Use Regular Expressions, and specify which occurrences of the matching text to replace (All, First, Last).

Changes specified in the Batch Rename Settings panel will be applied to the selections in the Preview panel and reflected in the "After" column.

Preview of modifications seen in the After column

Enabling Remove, via the checkbox, allows for the removal of characters from a specified position within the name of a Sound Object. In this example, one character is being removed from the first position from the end of the name.

Using the Batch Rename utility to insert decimal and hexadecimal data into a name allows for incremental numbering of Sound Objects. When enabled, the Insert functionality includes the insertion of either "Text" or "Text with Number" at the designated position and location. In this example, a decimal with zero-padding starting at the number 1 is being added 1 position from the end.

Adding a decimal with zero-padding starting at the number 1, 1 position from the end of the Sound Object name

The "Text with Number" functionality includes the ability to insert a number defined according to the C++ printf format number pattern, along with any applicable text adjustments. Commonly used number patterns are available in the selector list.

Once all of the Batch Rename functions have been previewed, clicking the "Rename All" button will execute the selected functions and apply them to the Sound Objects in the Preview panel.

Messages regarding the status of a rename Preview or execution are output in the "Message" column and indicate: success, warning, or error.

Batch renaming throughout the course of a project is limited only by the organizational methodology and naming standard that is adopted. While a naming standard begins with the WAV filename as it's imported at the beginning of the implementation pipeline, the continued application of naming standards across Sound Objects within the project helps maintain the fluid navigation of objects using easily identifiable naming conventions. The benefits of a well named and coherently organized project can help workflow clarity and allow collaborators to easily identify different parts of a project at a glance.